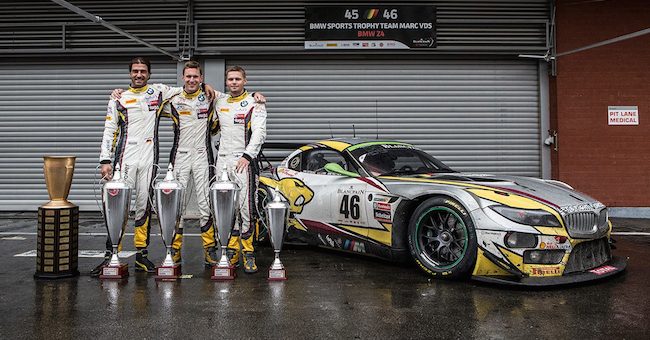 As Autosport reports, the winning Marc VDS BMW Z4 GT3 of Nicky Catsburg, Markus Paltalla and Lucas Luhr was forced to fight through the field of GT3 cars for the win after experiencing delays earlier on in the day. The team first had to deal with a wrong tire choice in wet weather conditions, and was then handed a penalty for breaking yellow flag stipulations.

Marc VDS was in for a strong finish from both of their entries until their second BMW Z4 GT3, driven by Maxime Martin, Augusto Farfus Jr and Dirk Werner, was forced to retire during the 19th hour due to transmission problems. This made things easier on the rest of the field, including second place’s Frank Stippler, Nico Muller and Stephane Ortelli, who finished one lap down from the winning BMW in their Audi R8 LMS.

The BMW took the lead when Marc VDS’ Catsburg passed Ortelli and the Audi was forced to take a pit stop under green flag conditions. The BMW, meanwhile, was able to pit under one of the race’s 10 yellow flags, giving them a significant advantage. The Audi entries couldn’t match the BMWs race pace, either, despite looking stronger in qualifying and practice.

In third behind Audi Club Team WRT was a second R8 LMS, this one fielded by Phoenix Racing’s by Nicki Thiim, Christopher Mies and Christian Mamerow. They finished two laps off the lead lap, and were only able to do so after the Mercedes-Benz SLS AMG GT3 of Daniel Juncadella, Stef Dusseldorp and Nico Bastian were forced to retire with engine problems in the race’s final hour.

The Blancpain Endurance Series heads to Germany next for the 1000KM of Nurburgring on 19-20 September. Belgian Audi Club Team WRT currently leads the team standings with 155 points to BMW Sports Trophy Team Brasil’s 93.