If you’re a fan of the sportier models in Subaru’s lineup, like the rally ready Impreza WRX STI or the 80s throwback BRZ, we’ve got good news; the automaker will be releasing a handful of limited edition “HyperBlue” examples of each car.

“How many,” you ask? The HyperBlue editions will be limited to 700 units of the Subaru WRX STI, and 500 of the BRZ.

The powertrains of each of these HyperBlue edition cars carry over from the standard models; that means 305 HP from a turbocharged flat-4 in the Subaru WRX STI, and 200 HP from a normally-aspirated flat-4 in the BRZ. But the interiors of each car get a makeover, with HyperBlue stitching adorning the Alcantara seats, leather-wrapped steering wheel and shifter boot, center console, and floor mats in the HyperBlue Subaru WRX STI.

You’ll find more of the Subaru HyperBlue color inside the BRZ, where the hue is given to the seat bolsters and head restraints, as well as to portions of the steering wheel wrapping, console kneepads, and door trim. Blue contrast stitching finds its way onto the seats, wheel, shifter boot, handbrake, and floor mats, as well.

The HyperBlue editions of the 2016 Subaru WRX STI and BRZ aren’t yet available; pricing will be announced this autumn, with orders to commence shortly thereafter. But if you’re yearning for a rare, limited-run Subaru performance model, you’ll likely want to order sooner rather than later; we anticipate that these cars will be bought up in a hurry. 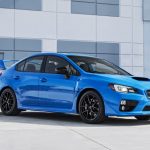 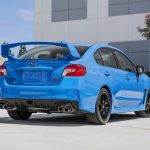 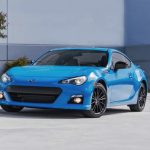 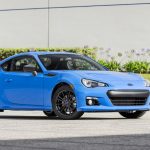