Among the breadth of “new old” continuation models of historic automobiles, few are quite as significant as those carrying-on the traditions of the Shelby American marque. One of these rare, exclusive continuation Shelbys is headed to auction this September at the Barrett-Jackson even in Las Vegas: namely, a “1965” Ford Shelby GT350 Mustang fastback wearing Carroll Shelby’s signature on the glove box.

This pristine blast from the motorsport past bears the serial number “CSC040,” being the 40th Shelby GT350SR ever built. The cars weren’t technically produced by Shelby American in Las Vegas, Nevada. Instead, Carroll Shelby partnered with Texas-based firm Unique Performance in the early 2000s to start producing these continuation Shelby GT350s. 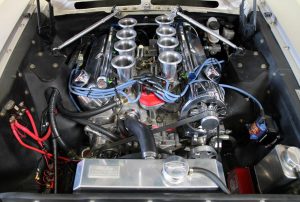 This particular example is silver with blue racing stripes, and is motivated by an all-aluminum 427 cubic-inch small-block producing 585 HP. The car’s steering and suspension have both been improved upon from the original car, and this Shelby GT350SR further offers four-wheel disc brakes and special Foose wheels.

Best of all, the 1965 Shelby GT350 continuation example seen here has counted a mere 700 miles since it was completed. And since Unique Performance went bankrupt a little less than a decade ago, this could be your only chance to offer one of these extraordinary, historically-significant Shelby American cars.