The Galpin-Fisker Rocket Mustang project has already produced a very desirable, attractive super-pony car based on the new 2015 Ford Mustang – a super-pony which debuted at the 2014 Los Angeles Auto Show.

But why not build on the dramatic design of this handsome-looking coupe with an open-top roadster?

Introducing the Galpin-Fisker Rocket Speedster Mustang, with all the potency and prowess of the coupe, plus still more wizardry from the design department. The top – like the rest of the body – is composed entirely of carbon fiber, and when stowed neatly in the rear of the car, transforms the new Galpin-Fisker Rocket from a four-seater coupe to a two-seater roadster. Output remains at 725 horsepower, thanks to a supercharger feeding the V8 engine.

The Galpin-Fisker Rocket Speedster Mustang was presented to the public at last weekend’s Pebble Beach Concours d’Elegance. Said Henrik Fisker of his own design work on the car: “When I worked on the Rocket Speedster project with [Galpin President Beau Boeckmann], the creativity sparks were constantly in the air. When I was designing the speedster cover, I gave it extreme sculpture and dynamic lines that flows [sic] with the muscular body of the Rocket and created a new interior graphic to go with it.

“I’m very excited to unveil the Rocket Speedster at the Pebble Beach concept lawn with Beau.” 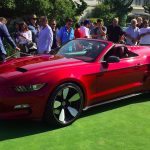 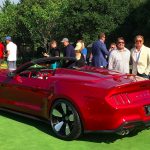 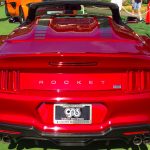