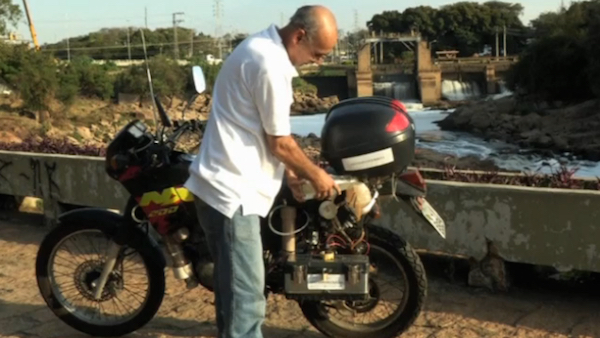 Ricardo Azevedo was tired of paying high prices for gasoline, but instead of biting the bullet like the rest of the world, he decided to come up with a solution. Using his mechanics skills and a few tips pulled from his son’s chemistry textbook, Azevedo built a water-powered motorcycle capable of travelling over 500 km on one liter of water.

The bike doesn’t run on water, but rather hydrogen. An electric current is sent through the water, breaking it down into hydrogen and oxygen through the process of electrolysis. The hydrogen is then burned by the engine as gasoline would be, creating an earth-friendly and more affordable mode of transportation.

Azevedo still needs to put the finishing touches on his watercycle prototype, but it’s already successfully taking him where he needs to go, and as he puts it, stopping at a river beats stopping at a gas station any day. Check out the Reuters’ report about Azevedo’s creation.