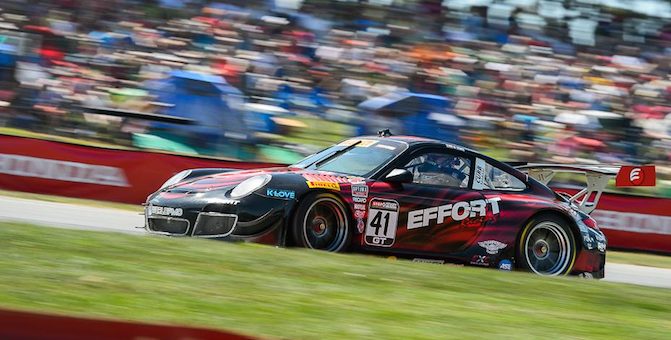 The first of the weekend’s two races kicked off Saturday afternoon. Dalziel, starting from pole position, immediately took the lead and was followed by Olivier Beretta in the Ferrari of Ontario Ferrari 458 GT3 in second and James Davison in the Replay CD Nissan GT-R GT3 in third.

Behind the three leaders, Butch Leitzinger’s Bentley Continental GT3 had stalled on the line, bringing out a full course yellow. Dalziel maintained his lead on the restart, while Davison managed to pass Beretta to take second. Dalziel then built a .945 second lead on Davison as the Nissan driver created a 2 second gap between him and Beretta. Dalziel managed to hold off both Davison and Beretta on a late-race Lap 28 restart and eventually took the win.

“This has been one of my favorite tracks since I came to the United States,” said Dalziel. “We’ve struggled a little bit this year with our qualifying pace but we have had good race pace. It will be nice to start up front again for Sunday’s race. I’m going to miss the Sonoma round due to the WEC event in August so our goal is to win every race now.”

Starting from first on Sunday, Dalziel rocketed into the lead and was never truly challenged for the top position. Davison shuffled in behind him in second, while GTA driver Brian Heitkotter finished first in GTA and third overall in the No. 05 Nissan GT Academy Nissan GT-R GT3.

“I never thought I would say that I could do better than last year’s two wins here, but, with two wins and two poles, we did it,” said Dalziel Sunday. “Last year’s weekend was a sweet introduction again to Pirelli World Challenge. The only thing we improved on was to take the two poles.”

The GT, GTA and GT Cup drivers will head to Miller Motorsports Park the weekend of Friday, August 21 for Rounds 16 and 17 of the 2015 Pirelli World Challenge season.

Photo by Camden Thrasher via Effort Racing on Facebook