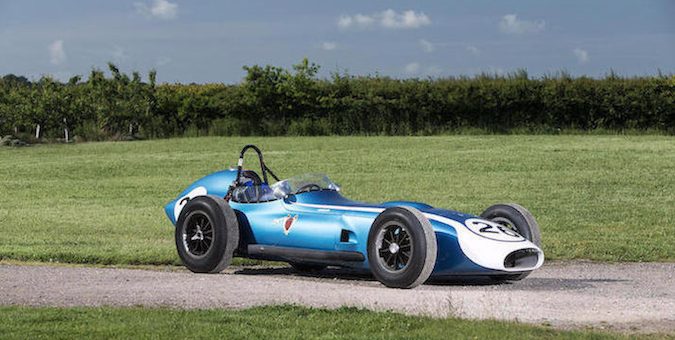 Lance Reventlow was your typical ‘playboy’ racing enthusiast. He was born into wealth, with his mother Barbara Hutton inheriting the Woolworth Department Store fortune, and learned about auto racing at a young age through his stepfather Igor Troubetzkoy.

With his money and knowledge, Reventlow started up Reventlow Automobiles Inc., a Grand Prix racing team that in his words wanted to go racing “for America.” The team was named Scarab after the Egyptian good luck beetle and went racing in Europe, initially with Chevrolet engines, but later switched to Mercedes power for their Formula 1 debut at the 1960 Monaco GP.

Unfortuantely for Reventlow and Scarab, their Formula 1 cars had already proved outdated by the time they made it into a Formula 1 race. After building eight Formula 1 cars, the operation was ended and Reventlow wrote the project off as a tax loss. Now long after in 1972, Reventlow was killed in a plane crash while teaching a less experienced pilot how to fly.

Scarab is one of the lesser-known outfits to have raced in motorsports’ top tier series, but they are far from forgotten. Bonhams is offering two Scarab Formula 1 cars at the upcoming Goodwood Revival sale on September 12, along with the teams’ former Fiat-Bartoletti transporter, giving F1 fans the chance to own an iconic piece of American motorsports history. Bonhams has yet to say how much the trio of vehicles will fetch, but considering they are an irreplaceable part of F1’s past, we imagine they won’t come cheap.