In 2012, when Ford Motor Company made the decision to introduce the ST-badged Focus hot-hatch to the American market, we were pleased as punch. It was a somewhat surprising choice; although the previous-generation car had fared quite well in Europe, the US had seemingly fallen out of love with the very notion of the performance hot-hatch since the 1980s, and collectively made the decision to pour any superfluous horsepower and agility exclusively into coupes, convertibles, and the odd sedan.

For those who did fancy a hot-hatch, the VW Golf GTI always seemed readily able to meet demand.

Whatever the reason that Ford Motor Company took the calculated risk of bringing the Ford Focus ST across the pond for 2012, we’re happy that they did. For one thing, the punchy little sports hatch perhaps served to test the waters in the US market, clearing a path for the even hotter 2016 Focus RS.

And for another, the Ford Focus ST is simply a great car on its own merit.

Last month, when Ford Performance invited us out to Michigan’s Grattan Raceway for an initial taste of the Shelby GT350R Mustang, they offered yours truly a 2015 model year Ford Focus ST for a few days to serve as transport. Confident in my own ability to remain objective and unbiased about both machines despite Ford’s kindness, I accepted.

Very rarely have I taken a shine to a car quite so quickly as I warmed to the 2015 Ford Focus ST.

A Car Tailor-Made For Man-Children 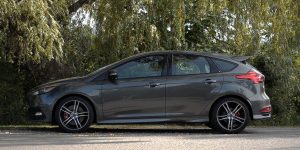 Mind you, the Ford Focus ST was developed specially for persons such as myself: twenty-some years of age, unmarried, and exceedingly juvenile with no particular urgency to grow up. For people meeting those criteria, the Focus ST is a wonderful partner-in-crime.

And we do mean “crime.” The Ford Focus ST is a dangerous thing in the hands of such a person – not because one risks bodily (or fiscal) injury to drive it, but because the car’s lively, sharp character constantly begs the driver to let loose with more hoonage. One must be ever vigilante with this car; the (sometimes overwhelming) temptation to chuck it around corners on public roads or see how high the boost needle will climb puts the driver in danger of getting carried away – a practice which is quite often greeted with flashing blue and red lights.

Further aiding the five-oh in spotting you for a hooligan and promptly issuing a citation is an almost absurdly prominent backwards baseball cap of a spoiler, some aggressive body work, and a turbo wastegate that, at full-tilt, can be heard from several blocks away. But when the conditions are right, and you’re free from the pesky, prying eye of Big Brother, one can indulge the Ford Focus ST and its penchant for mischief, and the car truly comes into its own.

First of all, the Ford Focus ST is built on the already excellent Ford Global C platform, itself an evolution of the C1 platform jointly-developed with Mazda and Volvo. It’s sharp, lively, and conducts a nice amount of feedback from the road. Add to that chassis tuning which 1)increases the steering wheel’s self-centering tendency, 2)makes it astonishingly easy to kick out the rear wheels, and 3)incorporates upsized brakes, firmer struts, and other equipment, and you have a real winner.

Second, the Ford Focus ST has just the right engine: a 2.0-liter EcoBoost inline four-cylinder with a turbocharger and intercooler. From the factory, that’s enough to guarantee 252 peak horsepower, with 270 lb-ft of torque – more than enough to make the car come alive. Ratios within the 6-speed manual gearbox are quite close, further lending to the car’s sporty feeling and impressive acceleration. In fact, it takes just 6.3 seconds or so to rocket to 60 mph, which is quite good for anything south of $30,000. 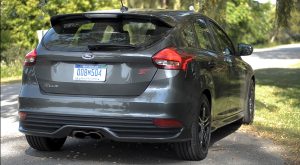 Now, 250 HP is a lot to be channelled through the front tires of any car; torque-steer, plus a propensity for initial understeer, are both valid concerns on a car like the 2015 Ford Focus ST.

Happily, we can report that the active torque-steer reduction system in the Focus ST is quite effective, minimizing the tug on the steering wheel to an almost imperceptible level. The system only ever proves insufficient when one really mashes the throttle, in which event, it really only adds to the reckless, devil-may-care attitude of the car.

Meanwhile, with regard to understeer, that all rests on how well the folks at Ford did their job in tuning the chassis: in this case, very, very well. Punch the throttle mid-corner in the Ford Focus ST, and the rear end is just as likely to break its grip as the front. Enough said.

The Focus vs. The Competition

In my brief review video above, I mention two formidable competitors to the 2015 Ford Focus ST: the Subaru BRZ (a.k.a. Scion FR-S), and the VW Golf GTI. As much fun as the Scibaru/Subion is, the Ford Focus ST is better. It’s more lithe, more powerful, more funkishly stylish, and holds more stuff, to boot. Up against the GTI, that’s more a question of personal taste. The GTI costs just $360 more, so the dilemma certainly can’t be decided by expense, and it offers an optional 6-speed dual-clutch transmission in addition to the base 6-speed manual. Acceleration is thus improved substantially when so-equipped.

But then, the Volkswagen is German, with a predictably Germanic sense of fun – or lack thereof. There is no massive rear spoiler, no tactlessly garish-while-awesome Recaro seats; the car fails to unlock your inner 19 year-old in quite the same way as the Ford Focus ST.

Then again, those plaid seat inserts are rather fantastic…

I digress. One competitor which I don’t get around to mentioning in the video above comes from the very same stable as the Ford Focus ST: the ST-badged version of the Ford Fiesta. While I’ve never had the occasion of driving the Fiesta ST myself, on paper, at least, that package seems like an even better one. At 2,720 lbs, it’s lighter than the 3,223-lb Ford Focus ST, and costs nearly $3,000 less. With that, of course, one must accept 55 fewer horsepower, less storage space, and a somewhat slower 0 to 60 time.

But if “fun” is the name of the game – which it is – then the Fiesta ST’s lighter weight wins out.