The cars are thoroughly covered in each of the photos, but judging from the design and shape of the two obscured cars, they are unmistakeably Bugattis. The folks at World Car Fans circulated the pair of images, apparently confident that hungry_penguin had indeed caught a rare sighting of the forthcoming Bugatti Chiron hypercar. That website reports that the alleged Bugatti Chiron prototypes were likely shown privately at the Pebble Beach Concours d’Elegance over the weekend, and are now shipping back to Europe. 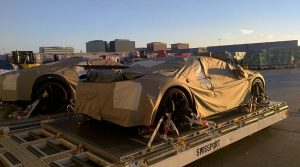 We, however, feel that a certain amount of skepticism would be wise. Of course we would like to believe that these obscured cars are, in fact, prototypes of the much-anticipated Bugatti Chiron successor to the Veyron, but we wonder how the cars could have avoided being leaked in some more revealing photos if they were shown privately. And, seeing as the Bugatti Chiron isn’t expected to be unveiled until the Geneva Motor Show in March, 2016, we have our doubts as to whether the marque is ready for even a private viewing.

The way we see it, it’s more likely that this is a pair of Bugatti Veyron models brought in to the recent Pebble Beach Concours d’Elegance; it is a major destination for super-luxury and performance marques worldwide. But of course, it’s impossible to know for sure.

Check back with Motrolix regularly for the latest Bugatti Chiron spy shots, news, and rumors.