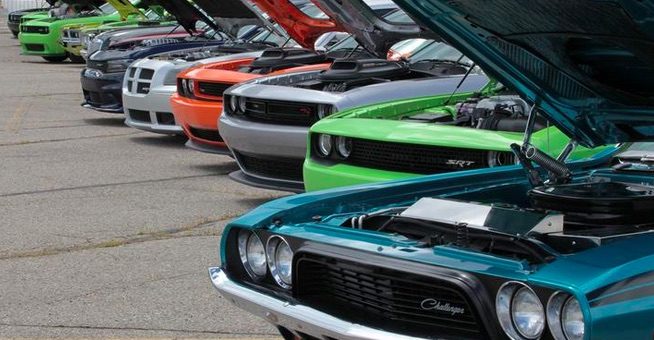 The Woodward Dream Cruise is upon us. Will it remain as it has been in the future? Here are our thoughts, from the Motrolix staff, to you.

If there’s one risk I should think the Woodward Dream Cruise doesn’t face, it’s change. Very likely both the event itself, and the sorts of cars that appear there, will remain very much the same as they are today, with an emphasis (as always) on loud, proud American brawn.

However, I do foresee one exception: alternative-fuel vehicles. Due to an increased level of environmental awareness – and perhaps even the future cost of a gallon of gas – I think we’ll see a sudden, disproportionate rise in both the number of EVs especially, and the attention that they draw. Contemporary cars like the Tesla Model S and the automaker’s earlier Lotus-based Roadster will be welcomed as heroes, long before such cars actually become “classics” in the traditional sense of the word.

When we talk about the Woodward Dream Cruise, we’re talking about an event which by-definition promotes old, inefficient technologies: carburetors, large-displacement V8s, three-speed slushboxes, big, heavy designs, and the like. At some point, whether initiated by environmental groups, preachy individuals, or the Woodward organizers themselves, there will be a push-back.

With over one million visitors and 40,000 vehicles last year, it’s safe to say the Woodward Dream Cruise has solidified itself as must-attend for any automotive enthusiast. The 16-mile mile stretch on Woodward Avenue will surely expand even further to accommodate throngs of fans eager to get a glimpse of future classic cars like the 2016 Ford Mustang GT350R and the 2017 Chevrolet Camaro ZR1.

The Woodward Dream Cruise vehicles will also be vastly different from today. The proliferation of forced induction will muzzle the development of large-displacement engines like those seen in the Dodge Challenger Hellcat, Camaro Z06 and Cadillac CTS-V to meet CAFE measures. This means that we’ll likely see engines strapped with one, two or even three turbochargers, perhaps in tandem with an electric or hydrogen propulsion system of some sort.

As a result, their thirsty powertrains will likely make them collectable. Plus, vaunted classics like the ’69 Camaro, the ’67 Mustang and the ’67 split window Corvette will be nearly 70-years old and– gulp– many will be relegated to the scrap heap in twenty years time.

The cars of tomorrow may well be faster and more efficient than today’s vehicles, there’s little doubt of that. However, the essence of the Woodward Dream Cruise – big engines, big power, and big noise – will always stay the same. And in twenty years, we’ll have today’s crop of muscle cars and sports cars to thank for that.

Judging by the outpouring of support the Woodward Dream Cruise still receives in 2015, it’s hard to imagine the event slowing down for anything in 15 to 20 years. But I suppose the scenery will be a bit different.

By that point in time, we’ll most likely have an all-new generation of American sports cars to cope with, and plenty of gnarly builds from this current generation of Mustang, Camaro Challenger and Charger. I would expect the same showing of classic car enthusiasts to round out the entire show but, here’s a prediction from left field: Jassics.

In 15 to 20 years, the guys and gals who grew up during Japan’s golden years of hot imports will be closing in on the same age as the bunch at the local classic cruise-in. I can envision a section dedicated to tastefully modified Mazda RX-7s, Subaru Imprezas, Toyota Supras, Acura NSXs and, since we will have passed the threshold for legalization by this point, R33 and R34 Nissan Skyline GT-Rs.

It’s a matter of fact these cars are special but, it wasn’t the current generation of classic car enthusiasts who really appreciated them, it was the youngins, who won’t be so young anymore. And how could they help it? These manufacturers were creating some of the most exciting product in the 1980s and 1990s while Detroit hit the snooze button for excitement, and the younger generation realized it quickly.

I don’t feel it’s a matter of if but, a matter of when, the Land of the Rising Sun begins to invade Motor City for the iconic Woodward Dream Cruise.

My colleagues have predicted today’s pony cars, EVs and imports will replace the classics that currently line the Woodward Dream Cruise, however I foresee the event staying much the same over next 15-20 years.

Today the Woodward Dream Cruise is the world’s largest one-day automotive event, attracting over 40,000 classic cars to the Metro Detroit area. The way I see it, much of those classic cars and their owners aren’t going anywhere, and will still be backing up Woodward every August with 1960s and 1970s Chevys, Pontiacs, Buicks and more.

Will some of the older classic car enthusiasts have died off or become disinterested by then? Probably, but at the same time, there’s no shortage of classic car lovers out there to fill their shoes. The older generation has done a great job of keeping 20-somethings like myself interested in the cars of their time, so muscle cars will still be on Woodward in 20 year’s time, it’s just a younger car enthusiast will have driven it there.

There may be a few more Japanese imports and alternative energy vehicles at Dream Cruise in 20 years, but I believe the same type of car enthusiast that is currently attracted to such an event will still exist going forward.

After Detroit’s name is changed to Dan Gilbertopia in honor of its overlord, the 2030 Woodward Dream Cruise sponsored by Quicken Loans will stretch the entire event from the Joe Louis Fist on Jefferson Avenue to M59 in Pontiac. A city that will eventually change its name to a GM brand that still exists. Those that don’t want to put up with the traffic jam that ensues can even take the boondoggle M1 trolley from one end of the show to the other. Unsurprisingly, environmentalist protestors will establish a foothold in Ferndale, where they will corral electric cars such as the Tesla Model S, Chevrolet Volt and GEM.

South of the 8 Mile Road overpass dividing Ferndale and Detroit will begin a corridor of Japanese and European classics. The southern end of Woodward will eventually be cleaned up enough to the point where at least automotive bohemians (old Volvo enthusiasts who will tell you they’ve lived in Detroit since before it was cool) will park their station wagons, lift their hatches, unfold their hand-crafted Shinola leather stools and just hang out. There will also be a Volkswagen Mk I GTI parked next to a mint Toyota AE86, parked next to a first-gen Subaru STI, next to an original Audi Quattro. And so forth.

The domestics always will have a presence at the Woodward Dream Cruise. No question about that. And they will likely stay between the confines of Birmingham and Ferndale’s 9 Mile Road. But between a coming-of-age-generation lost from overall mediocre product that went elsewhere, and the unstoppable comeback of The Motor City itself, the future therein lays a perfect storm of diversity and expansion for the biggest single-day automotive event in the world.