Beside his long list of accomplishments as a racing driver, businessman, and chicken farmer, the late Carroll Shelby was reportedly quite adept at sleight of hand. Legend has it that after the Texan had built the Shelby Cobra by shoehorning a Ford V8 into the AC-supplied roadster body, he fooled the FIA and just about the rest of the motoring world into believing that enough of the cars had been produced to pass FIA homologation rules. How? By repainting the same example between each of its appearances in motoring magazines.

In fact, according to Team Ford Racing Marketing Manager Jim Owens, check the right spots on the very first production Shelby Cobra, and you can spot remnants of the car’s previous lives as a yellow, red, or black roadster under its top-most blue coat.

The bizarre backstory of the first prototype 2016 Ford Shelby GT350 Mustang is concurrently appropriate. After first showing the car in white with blue stripes at the Los Angeles Auto Show last November, Ford wasted no time at all shipping it back to Dearborn, painting it “Liquid Blue” with black stripes, and converting it into a bona fide Shelby GT350R to be shown at January’s Detroit Auto Show. History is cyclical, and there’s perhaps no better way to conceptualize the 2016 Ford Shelby GT350 Mustang than as an open love letter to the late chicken farmer and lover of speed.

To Shelby, With Love 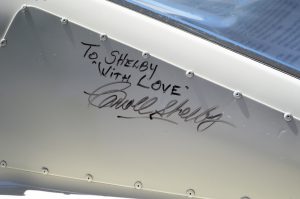 Both this year and next, Ford Performance will be touring the country with the 2016 Shelby GT350 and GT350R; the cars were made available to members of the press and potential customers at Mazda Raceway Laguna Seca this month, and more recently, they stopped by Road America in Elkhart Lake, Wisconsin. That’s where Motrolix got the chance to drive them.

So, what’s it like driving the new Mustang-based Shelby GT350 and GT350R? In a word, “incredible.” In the most basic sense, the Shelby GT350 is to the Ford Mustang what the Z/28 is to the Chevrolet Camaro; both resurrect historically significant nameplates, and both are stripped-down, simple track cars built from more mainstream sports coupes.

In a much more real sense, the Shelby is so much more. Even the regular Shelby GT350 ships with MagneRide suspension from the factory when either the “Tech Pack” or “Track Pack” is optioned. The former is aimed at those buyers who aren’t necessarily looking to set any hot laps, but rather, want an everyday, comfortable cruiser with the beating heart of an old school racer. The latter, of course, is aimed at customers who will take their horses out for a day at the races, and often.

Driving the Track Pack-equipped Shelby GT350 at Road America, we felt quite a lot like Dan Gurney must have all those decades ago. Sure, the car is loaded with technologies which would have been nearly unfathomable back then – EFI, stability control, a computerized MagneRide suspension – but those things are so seamlessly integrated into the driving experience that it’s easy to forget they’re there. And remember: the Ford Shelby GT350 is available exclusively with a manual transmission, with no active rev-matching. All downshifts must be carried-out with a good, old-fashioned heel-and-toe maneuver.

The Track Pack option on the Shelby GT350 also gets rid of the radio and air-conditioning systems which, beside cutting down on unnecessary weight, feeds into the car’s Zen-like “man-and-machine” sensibilities. Depressing the clutch is like engaging in a firm handshake with your left foot; the shifter is crisp and sure; the 526 hp 5.2L flat-plane Voodoo V8 engine note is loud and primal.

In short, the 2016 Ford Shelby GT350 is pure, driving bliss, with no distractions.

Anything It Can Do, The R Can Do Better

There are precisely two very important, hugely satisfying reasons to step-up to the Shelby GT350R: carbon fiber wheels, and an even more incredible exhaust roar.

That latter perk is the result of the decision to delete the exhaust resonators on the GT350R. The folks at Ford Performance told us that this offers no significant reduction in back-pressure, and thus doesn’t amount to any more horsepower. Instead, they say, the resonators were removed solely for the purposes of weight savings.

We call baloney; the decision to forego the resonators was likely an aesthetic choice, plain and simple. And we applaud them for it. If the regular Shelby GT350 is an adult lion, the R-badged version is that lion’s terrifying, imposing father, screaming at him to get a job and move out of his jungle.

If only every car could sound so good.

The result of all that noise: a further enhanced sense that you are piloting a tried and true race car, with all the sound, fury, and might that comes with it.

Of course, for all intents and purposes, you are piloting a true race car, and the aforementioned carbon fiber wheels take the GT350R into the realm of the sublime. The car feels fundamentally the same as the Track Pack GT350, only somehow smaller (it isn’t), lighter (it is), and more precise. The reduction in unsprung mass means a faster suspension reaction-time, while less rotating mass ensures quicker directional changes. Ford has claimed a curb weight of 3,652 lbs for the GT350R, versus about 100 more for the Shelby GT350, but the difference feels far, far more impressive.

In addition, the more hardcore of the two Shelby Mustangs features unique aerodynamic pieces to give it more downforce. According to Ford, the 350R’s big rear wing wasn’t even part of the original designs for the car; instead, it was drafted after countless hours of track testing revealed that the rear end came unglued a bit more readily than on the run-of-the-mill Shelby GT350. The front lip spoiler, too, stretches a bit farther out and down than on its sibling.

The result is really quite indescribable. There are very few cars we’ve driven on Road America that have filled us with as much confidence in every corner, each of which had all-wheel drive, and far less horsepower. “On rails” is perhaps a cliché, but here, it’s apt. 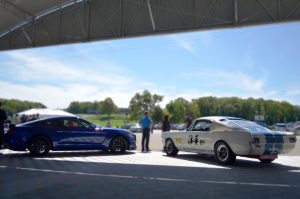 After Road America, Ford Performance is continuing the Shelby GT350’s North American track tour, bringing both the 350 and 350R to Lime Rock Park and Sebring International Raceway before 2015 is through. Next year, the team has tentative plans to continue the tour, travelling first to Watkins Glen International, followed by Virginia International Raceway, Toronto Motorsports Park, and possibly Pacific Raceways, before finally hitting up Sonoma Raceway (formerly Sears Point) and Circuit of the Americas.

Why these road courses in particular? According to Jim Owens, “if there is one consistent thread with all of those tracks – with the exception of COTA – it was someplace that Carroll’s team and his merry band of hotrodders scored points in SCCA Production-B in the sixties.”

The late, great Carroll Shelby was a positively giant presence in motorsports, and arguably even more influential to the world of automotive performance as a tinkerer, business owner, and renowned tuner. Of course, Mr. Shelby is no longer with us, and previously, much of the motoring world might have concluded that the last supercharged 662 HP Ford Shelby GT500 was Ford’s monumental, final farewell to the man who contributed so much to advancing the pursuit of going fast. That, it seems, has been proven false, as although Carroll Shelby was not around to see its gestation and execution, we feel that the 2016 Ford Shelby GT350 is infused with more of the spirit of its namesake than perhaps any Mustang since the original 1965 Shelby GT350.

To Shelby, with love. 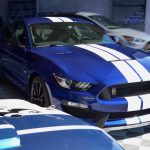 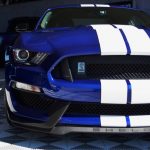 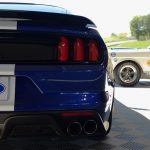 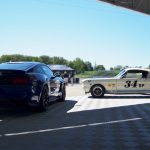 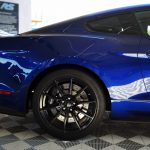 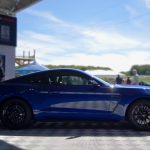 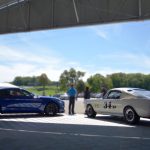