The Audi R8, both past and present, is a stable, competent thing. All-wheel drive makes the supercar’s heaps of performance perhaps a bit more accessible for the layman, and even the previous-generation V10 Plus model isn’t the most overwhelming thing, at a respectable – if not incredible – 542 HP.

But if you’ve ever wanted to see an Audi R8 just a little bit more unhinged, then the RECON MC8 by London-based tuners Potter & Rich might be for you.

The RECON MC8 is a first-generation Audi R8 V10 Plus at its core, but it’s been militarized almost beyond recognition. The main headline: 950 HP and 664 lb-ft of torque, thanks to a supercharger and some fiddling. The other: a conversion to rear-wheel drive, with a Drexler differential and an upgraded version of the car’s native 7-speed dual-clutch transmission.

Of course, even before getting to the spec sheet, you’ll be able to spot this Audi R8 V10 Plus for a very special beast; it wears an almost superfluous amount of carbon fiber all around. Notably, that includes some massive new fender extensions, plus a wing just about big enough to eclipse the sun. Red, 21-inch rims sit at the back, while 18-inch wheels carry the front, further contributing to this Audi R8’s racy, sharp appearance.

The RECON MC8 is the Audi R8 V10 Plus, completely reimagined. It’s the R8 that Rod Stewart might drive, as opposed to the example owned by your family dentist. While some might disagree, we’ve always felt as though a little touch of insanity is never a bad thing. 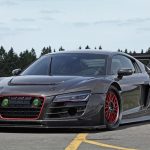 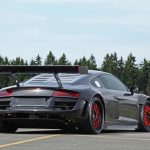 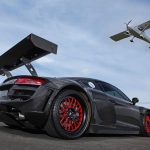 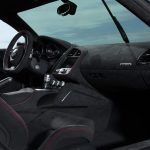 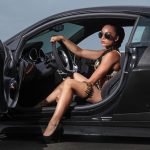 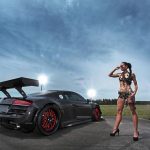