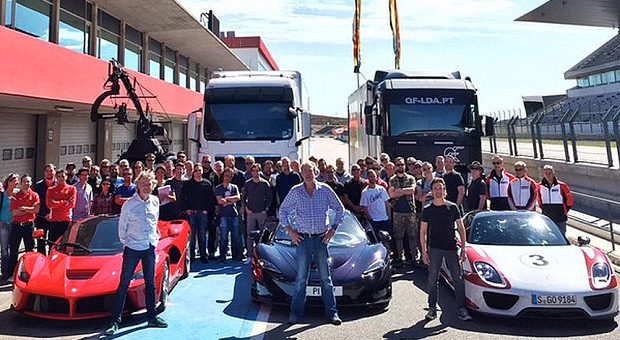 The former Top Gear trio of Jeremy Clarkson, James May and Richard Hammond have officially begun filming on their new Amazon Prime motoring show, with all three of the presenters tweeting out photos featuring all or one of the ‘Holy Trinity’ of supercars, the LaFerrari, Porsche 918 Spyder and McLaren P1.

Filming for the new show is believed to have begun at the Algarve International Circuit in Portimao, Portugal. Amazon has yet to announce a name or any details about the show, however Clarkson said the filming took place “with a skeleton crew,” of workers.

A three-way test between the LaFerrari, Porsche 918 and McLaren P1 has been desired by car enthusiasts since the three were launched, and it was rumored to be all set for a new season of Top Gear before Clarkson was let go from BBC for assaulting producer Oisin Tymon. It appears as though the new show, rumored to be called ‘Gear Knobs’ will pick up exactly where the Top Gear we once knew left off when it premieres next year.