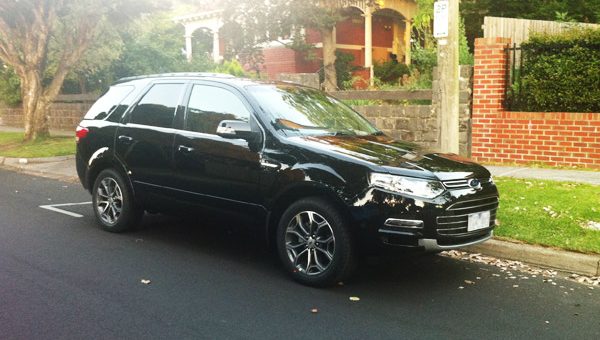 The Australian-built Ford Territory is one of the remaining international Ford vehicles that American auto enthusiasts have dreamed of being able to purchase for years — but will most likely never be able to officially. For starters, the midsize crossover is built on the same coveted rear-wheel-drive platform as the Ford Falcon. If that’s not enough to tickle your fancy, the Territory also has a range of burly 4.0 liter V6 engines that are nothing short of spectacular. So you can imagine our general excitement when some eagle-eyed spy shooters captured the latest update to the Australian soft-roader without any camo.

The updated exterior shares many styling elements with the Falcon sedan — a bulbous front end accompanied by headlights that extend to the front fenders, with daytime running lights underneath. In fact, at first glance it’s easily to mistake the updated Territory for the new Explorer, but the front and rear ends reveal that it’s something totally different.

The underlying chassis will remain the same, as will the RWD/AWD power delivery system, but the big news lies under the hood, with a Land Rover-sourced 2.7 liter diesel V6 good for 140 kW (about 188 hp) and 445 Nm (about 328 lb.-ft.) of torque. Fuel economy is expected to be greater than the base petrol (gasoline) powered 4 liter inline six that’s rated at 12.0 liters per 100 kilometres (about 19.6 MPG).

Expect the revised Territory to arrive at Australian dealers around April of 2011, but we have to wonder about the next-generation Territory. Given that it’s not a global vehicle and therefore doesn’t jive with Ford’s global-focused One Ford plan, it could be replaced by the next-generation Ford Edge (both vehicles are nearly the same in size) or the next-gen Ford Explorer.

Hit the jump for more pics and let us know what you think Ford should do with the next-gen Territory in the comments below!