Having established itself as the clear leader in lighting technology with such industry firsts as LED daytime running lights, LED headlights, and smart beam (aka matrix LED), Audi is taking lighting and vision to a whole new level using lasers. The automaker’s R18 e-tron quattro race car that will compete this year in the 24 Hours of Le Mans will feature illumination made up of LEDs and laser light.

The R18’s matrix LED headlights will be comprised of eight LED units per side and laser light, which provides a much more homogenous and precise spread in the front of the car, according to Chris Reinke, Head of LMP at Audi Sport. Of course, optimal illumination on the track plays a crucial role in endurance races such as the 24 Hours of Le Mans, which partially take place in darkness and low-light conditions. 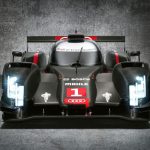 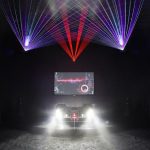 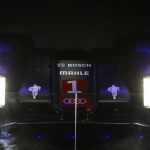 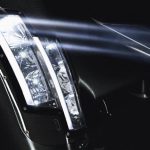 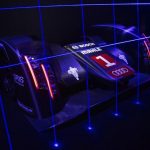 Two-time Le Mans winner and former World Endurance Champion Marcel Fässler has already experienced the new headlights during tests held in darkness. “I’ve never had such good light on a race car as on the new R18″, commented the Swiss on his experience. “It’s clearly even better than last year”, he said, referring to the R18’s LED matrix lights introduced in 2013 and that are available on the A8. “I wouldn’t call this just one step forward, but three. The laser light is brighter, more concentrated and more precise. For example, you can see the apex of a corner much better with it. At night, this could be a crucial advantage for us.”

We don’t think anyone (in their right mind) would dispute the notion that Audi has clearly established itself as the forerunner in automotive lighting, having started the LED Daytime Running Light trend that most other automakers seem to be imitating these days. Then came full LED headlights, the (questionably-legal in the U.S.) matrix LED lighting, and now, laser lighting. All told, the importance of visibility when it comes driving and racing is vital, and that rings even more true during the night.

But forget all that… Audi is using lasers in its lights. LASERS! Just skip to 0:45 in this video: