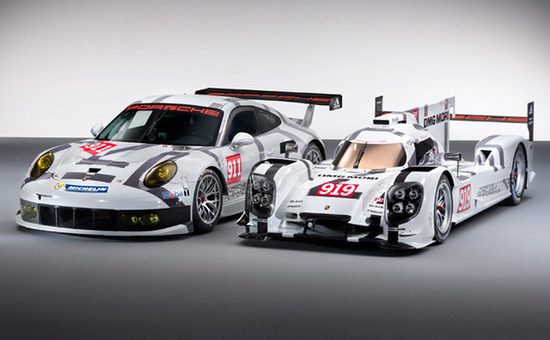 Porsche has finally unveiled its competition car for the 2014 World Endurance Championship – the 919 Hybrid.

Producing approximately 500 horses, the 919 is powered by a 2.0 liter V4. What separates the 9000-rpm V4 is the two energy recovery systems designed to make the most out of the heat (given off via exhaust fumes and lost energy) from the braking system. As in Porsche’s previous 918 Spyder, the energy is recovered and stored in a battery system, but the second system uses an electrical generator to recover heat energy from otherwise useless exhaust fumes.

According to our friends at Autoblog quoted Porsche Chairman Matthias Müller as saying, “In 2014, it will not be the fastest car that wins the World Endurance Championship series and the 24 hours of Le Mans, rather it will be the car that goes the furthest with a defined amount of energy. And it is precisely this challenge that carmakers must overcome. The 919 Hybrid is our fastest mobile research laboratory and the most complex race car that Porsche has ever built.” The challenge of making vehicles go further on limited energy reserves is an interesting proposition for Porsche to welcome.

The full array of 919 Hybrid pictures can be seen here.