The medium-duty F-650 and F-750 will offer the Power Stroke V8 in three different power ratings, including:

“While other medium-duty truck manufacturers restrict top horsepower and torque ratings to certain applications, such as emergency services, the all-new F-650/F-750 will arrive with no vocational restrictions,” said John Ruppert, general manager Ford Commercial Vehicle Sales and Marketing. “We’re giving our customers the power of choice to determine what’s best for their business.”

The 6.7-liter Power Stroke V8 turbo diesel available in the 2016 F-650/F-750 is the second-generation of the original Power Stroke engine. Building on the success of the same engine found in the F-Series Super Duty lineup, the second-gen Power Stroke is mated to a Ford-developed commercial-grade six-speed TorqShift HD automatic transmission that’s been developed and tested for medium-duty applications. The powertrain is covered by a five-year/250,000-mile limited warranty.

In addition to the Power Stroke turbo diesel V8, Ford will offer its familiar 6.8-liter V10 as the standard engine in the new F-650 and F-750, remaining the only automaker to offer a gasoline-powered engine for a medium duty truck. The V10 makes 330 horsepower and 440 pounds-feet of torque and is paired with the the TorqShift HD six-speed automatic transmission. The 6.8-liter V10 can be factory-prepped for converting to compressed natural gas or liquid propane gas as cost-effective alternatives to gasoline.

Ford’s new medium-duty truck lineup will be offered in Regular Cab, SuperCab and Crew Cab styles as well as in straight frame, dock height, and an all-new dedicated tractor model for heavy towing applications. The trucks will be manufactured at Ford’s Ohio Assembly plant and become available for purchase in the spring of 2015. 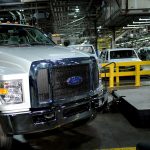 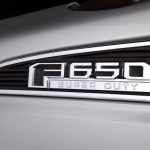 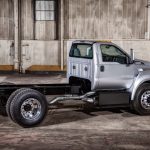 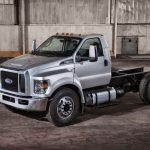 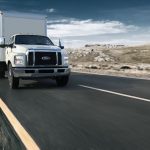 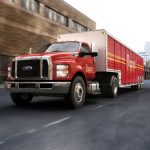 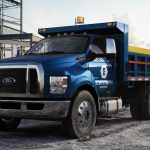