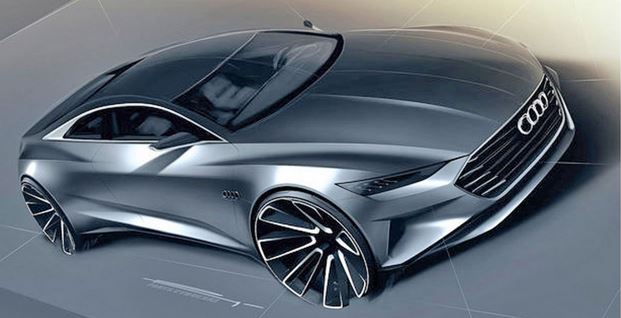 Sharp. If we had one word to take a crack at describing what Audi’s chief designer Marc Lichte crafted here, it would be “sharp.” The Audi Prologue concept will make its grand debut in Los Angeles at the Los Angeles Auto Show where it will definitely be bringing its larger than life presence.

And we mean large. The Audi Prologue is big. Measuring in larger than anything the brand currently offers, the concept 201-inches in length and 77-inches wide. The Audi Prologue is meant to be in your face, as it finally looks to take on Mercedes’ mighty S-class Coupe, something it hasn’t been able to do formidably with the A8. At first, it was rumored to be called the Audi A9, and of course we now realize that while the could be the name for such a model if/when it reaches production, the official name is not that. A “prologue” to an official A9 coupe, perhaps?

As noted above, the work is of Audi chief designer Marc Lichte, and his design highlights include a ground hugging single-frame hexagonal grille, flush wheels fitting tight to the sleek body and distinctive LED designs.

The concept points to road ready vehicle, and a 2017 date seems plausible. The outlet also suggests a 600-horsepower 4-liter V8 with forced induction, although a hybrid setup may set the Audi Prologue apart from the S-Class Coupe, and most Audi vehicle concepts find some sort of hybridization along the way regardless.

By the time 2017 rolls around, the Audi Prologue concept may face stiff competition. Mercedes certainly won’t sit by with its king S-Class Coupe. BMW has previewed a possible 8-series in the past. Cadillac will have launched the CT6 and possibly a bigger brother or coupe variant to it by that time. Even Infiniti previewed the Q80, and looks to change perceptions that the Japanese can build an ultimate luxury cruiser, and it’s not something reserved for Germany’s finest.

Stay tuned for more coverage of the Audi Prologue concept as it is unveiled this week at the 2014 Los Angeles Auto Show.