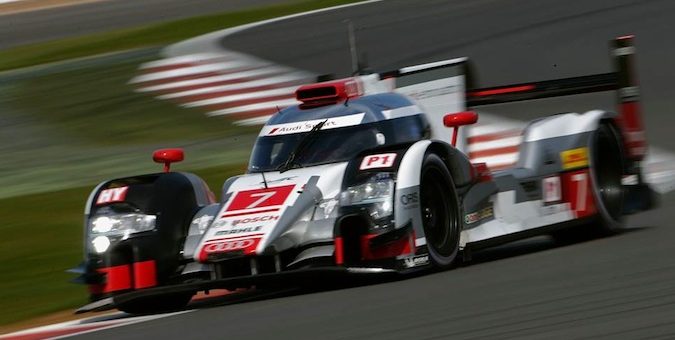 Audi Sport Team Joest has started 2015 off on the right foot, edging out Porsche and Toyota for the win at Silverstone this past weekend. The No. 7 R18 e-tron, piloted by Marcel Fässler, André Lotterer and Benoît Tréluyer, crossed the finish line in first followed by a hard-charging Porsche 919 and a Toyota TS040 in second and third, respectively.

The No. 7 R18 took the lead on lap 96, as Speedcafe reports, passing the No. 18 919 Hybrid driven by Romain Dumas, Neel Jani and Marc Lieb. Fässler, who drove a double stint in the race, then gave the Audi a 72-second lead over its German competitor, however he was given a stop-go penalty for ‘exceeding track limits’, putting his potential victory in jeopardy.

Fässler pitted for fuel, then served his stop-go penalty a lap later. By the time he re-entered the race, the Porsche was just 8 seconds behind with 15 minutes to go. To his surprise, he was able to hold off a quickly approaching Porsche team for the win.

“I didn’t know if I would be in the lead again after the stop/go penalty actually,” said Fassler.

“I was thinking I would fall back to third place but then I was told I was in the lead and we managed to hold it to the end.”

The Silverstone win gives Audi an early lead in the WEC manufacturer’s standings. The automaker will be looking to fend off Porsche and reigning series champs Toyota when the series heads to Belgium for the highly anticipated 6 Hours of Spa on May 2nd.