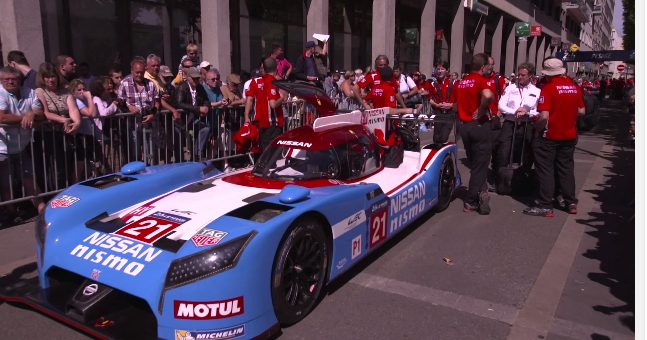 Nissan seems like they would rather show up to a race with a radically different design and either win or fail spectacularly than finish in the middle of the pack with a standard type racecar. This mentality was on display when they occupied Garage 56 at the 24 Hours of Le Mans with the weirdly awesome DeltaWing, and they’ve done it again with the GT-R LM Nismo LMP1 car.

The GT-R LM Nismo came to fruition after designer Ben Bowlby decided he didn’t want to “do an Audi copy,” because the German automaker had put more time and money into that type of design. Instead, Nissan went the complete opposite direction of the AWD diesel racer, rolling out a 750 horsepower front-engine FWD prototype.

Bowlby is the same guy who designed the DeltaWing, and it shows once you really start to learn about how the LM Nismo works. The front wheels are wider than the rears for balance, and the team had to mount the turbochargers on top of the engine and do away with traditional halfshafts to accommodate their huge airflow tunnels. It all seems a bit over engineered, but that’s not to say it won’t work.

The Nissan team recently talked about their radical new car and their return to Le Mans’ LMP1 class for a Nismo promotional video. Check it out below, and don’t forget to follow the GT-R LM Nismo’s progress when the 83rd 24 Hours of Le Mans kicks off this Saturday at 9 A.M. ET.