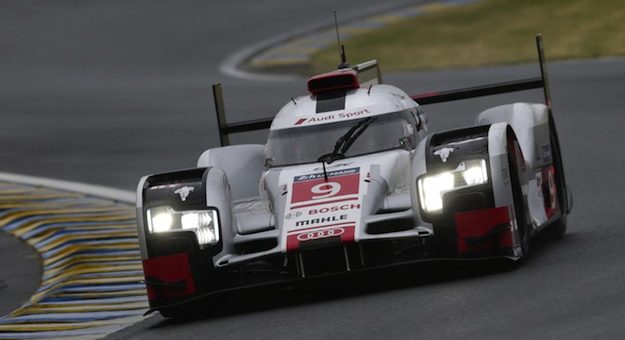 The No. 7 Audi R18 e-tron quattro of Andre Lotterer was the fastest LMP1 car during free practice at the Nurburgring Friday posting a time of 1m39.201s. Porsche’s No. 18 919 hybrid was close behind the Audi, with Neel Jani being on pace to knock the Audi off the top of the leaderboard before aborting his lap.

Lotterer managed to turn in 40 laps during the 90-minute practice session, while Jani and the No. 18 Porsche turned in 38 laps. Prior to aborting what was to be his fastest lap, Jani came within 0.076s of Lotterer’s time after lapping the Nurburgring GP course in 1:39.201.

In behind Lotterer and Jani was the No. 8 Audi R18 e-tron quattro with a time of 1:39.910, which led the No. 17 Porsche by 0.714s. Rounding out the top five was Toyota’s two TS 040 hybrids, which are not being developed throughout 2015 due to Toyota planning a switch to turbocharged engines for the 2016 FIA WEC season.

A third free practice session is scheduled for Saturday morning ahead of LMP qualifying in the afternoon. For full results from FP2, click here.