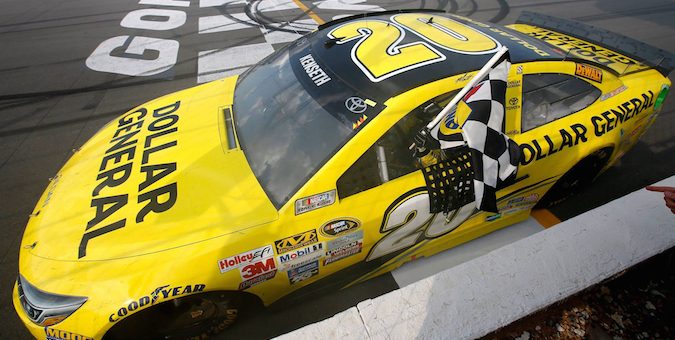 Kyle Busch was leading the Windows 10 400 at Pocono Raceway as the white flag came out, but in an unexpected turn of events, it was his Joe Gibbs Racing teammate Matt Kenseth that would ultimately take the win.

Just as Joey Logano had done a few laps prior, Busch dropped out of the lead when his No. 18 Toyota ran out of fuel. This allowed Kenseth to easily cruise past Busch with Brad Keselowski and Jeff Gordon following in second and third, respectively. The top three finishers led just seven combined laps, the result of front runners Busch, Logano and Martin Truex Jr. running out of fuel late in the race.

As Kenseth took the win, Busch dropped back to 21st, while Truex Jr. and Logano were relegated to 19th and 20th, respectively. Rounding out the top five was Dale Earnhardt Jr. in fourth and Greg Biffle in fifth, who just like Kenseth didn’t appear as though they would lock in a very strong result before Logano, Truex Jr. and Busch ran out of fuel.

Kenseth was unsurprisingly shocked by the result, which came at a track he historically isn’t very strong on.

“There’s nothing like wins,” he told NASCAR.com post-race “We had a lot of wins in 2013 and were pretty spoiled and last year we had a big dry spell, and this year we were able to win Bristol.”

“We’ve been up front a lot, so just really, really thankful to be with these guys and to get the win. I never thought I’d ever win at Pocono, and I never ever thought I’d win a fuel mileage race, so we did both today.”

NASCAR heads to the road course next for the Cheez It 355 at Watkins Glen International. For full results from the Windows 10 400 at Pocono, click here.