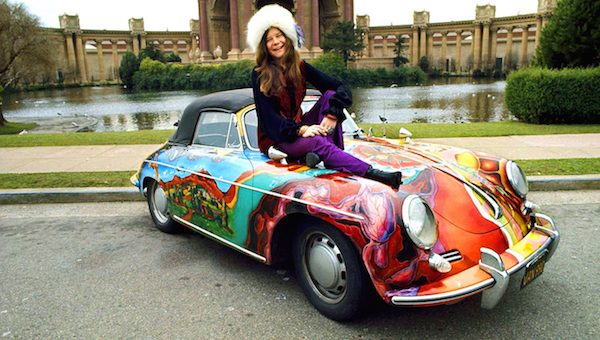 Janis Joplin was always different. In high school, she was an outcast, and in university, the student paper even ran a profile on her focusing on her quirky style titled ‘She Dares to Be Different’. Her outlandish style even extended to her car, a now iconic Porsche 356 C adorned with a psychedelic mural.

Joplin’s Porsche has remained in her family’s ownership since her death in 1970 and has been on display at the Rock and Roll Hall of Fame in Cleveland for over 20 years. Now, though, the family has decided to sell the car at RM Sotheby’s upcoming ‘Driven by Disruption’ auction in New York City.

The Porsche, a 1965 model year car purchased used by Joplin, was restored by Joplin’s family in 1990. It was a well-known sight within the California music scene in the 1960s, mainly due to its mural, which was painted by Dave Richards, a friend of Joplin’s and a roadie with her band.

RM’s Driven by Disruption auction and display is an appropriate place for Joplin’s 356 C to be sold, as it will “showcase the extremes of motoring history,” and “the molds that were broken by engineers and designers pushing the automotive envelope.” If you’d like to see it on display before it finds a few forever home, RM will open the showcase to the public from December 5 through to the 10th.