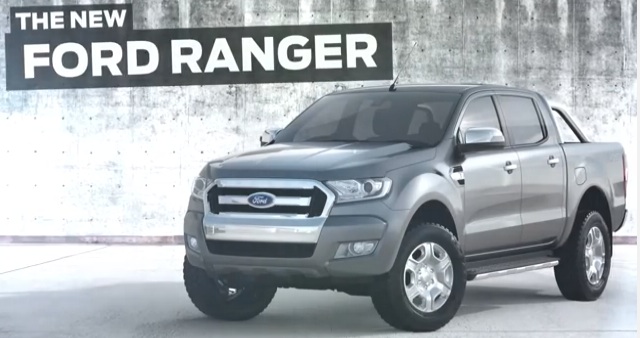 Surely someone within The Blue Oval has to be thinking, “Huh, that new Colorado sure is being welcomed with open arms.” We think The General’s 2015 Colorado and 2015 Canyon twins could use some company from Ford, especially now that the Dearborn-based automaker has unveiled a short teaser video of its 2015 Ford Ranger.

For those who might not remember recent history: the Ford Ranger died a slow and stale death in the U.S., as it went oodles of model years without as much as a facelift. As the small truck segment dried up, Ford discontinued the Ranger altogether for North America. It seemed the segment was a goner as the first generation Chevrolet Colorado and GMC Canyon also disappeared before being completely reworked in 2013. To this day, the Toyota Tacoma and Nissan Frontier remain the only other options, and are becoming very long in the tooth. That’s the status of the midsize truck segment in the U.S.

As for the 2015 Ford Ranger, well it wears a more rugged front fascia much like its platform mate, the new Ford Everest, ditching the Fusion-esque tri-chrome grille. Ford touts a much more comfortable ride and says the truck is safer than ever. It’s also refreshing to see the new Ranger not look like a mini F-150 mini, as it wears its own persona with a burly front end and sharp-looking hood creases.

Now that the small truck segmented has been reinvigorated by the new Colorado and Canyon, Toyota isn’t standing by with its Tacoma, with a new model reportedly coming in 2016. Nissan, meanwhile, is reportedly also working on a new Frontier. And so it seems like the perfect time for Ford to surprise the U.S. with a return of the Ranger.

Competition is good for everybody. Unless you choose not to compete. We’re looking at you, Ford.