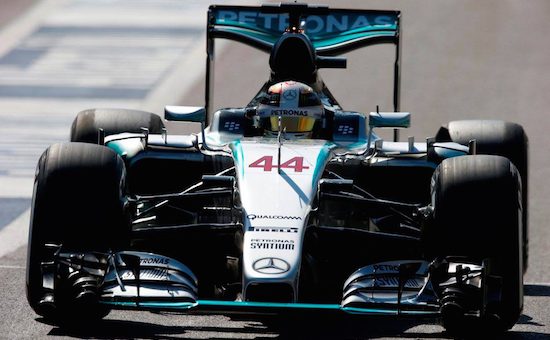 Lewis Hamilton won the 2015 Belgian Grand Prix at Spa Sunday, taking an early lead and beating out teammate Nico Rosberg to take his sixth victory of the season. The German followed him across the finish line to take second, while Lotus’ Romain Grosjean came third to give Lotus its first podium position of the year.

Hamilton, unlike Rosberg, got off to a strong start when the lights went out. Coming from pole position, the Briton lead the field into the first turn and was chased out by Red Bull’s Daniel Ricciardo and Force India’s Sergio Perez. Hamilton was eventually able to pull away while Rosberg, stuck in traffic after faltering on the start, fell behind.

Rosberg was able to make up time on his teammate after electing to pit first. A Lap 21 virtual safety car then brought the two even closer together, however Hamilton again pulled away from him and easily drove to his 39th Grand Prix victory.

There was no shortage of drama behind the Silver Arrows, with Ferrari’s Sebastien Vettel attempting to run a one-stop race at F1’s longest track. The strategy put him in third in the closing laps, but with Grosjean pushing hard, Vettel was forced to push his pace on severely worn tires. With one lap left, Vettel’s right rear tire blew, relegating the Ferrari to twelfth in the running order and giving Grosjean his first podium since 2013.

“The guys have been working hard to give us the car to be where we are today,” Grosjean said. “Being here today is special for us, it has the prize of a race win.”

Both Lotus and Mercedes will be looking to carry the momentum earned at Spa to Monza next month to post a good result at the Itaian Grand Prix. Lewis Hamilton currently leads the drivers’ standings with 227 points to Rosberg’s 199, and Mercedes leads the team championship with 426 points to Ferrari’s 242.