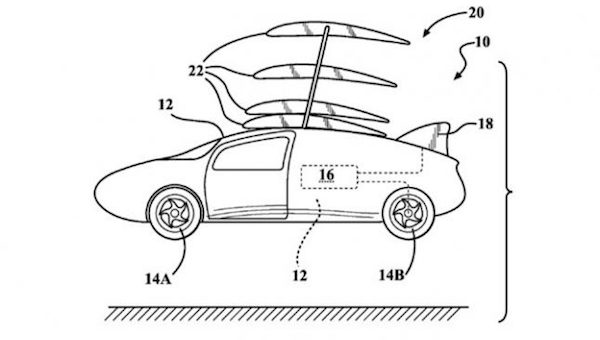 It’s not unusual for automaker to file for patents for their new innovations and inventions, however Toyota has recently made headlines for a rather unexpected filing.

According to Bloomberg, Toyota filed for a patent with the U.S. Patent and Trademark Office for a “stackable wing for an aerocar.” The application describes a wing that would change its shape when stacked atop a car roof versus when it’s deployed for flight.

When the car is in standard driving mode, described by Toyota as “roadable” mode, additional wings can be stacked atop the first wing, giving the car a stacked wing look when they are deployed, as pictured above.

It’s not clear if Toyota plans to use this design on a coming production car or concept car, but even if they don’t, it’s interesting to see where some of Toyota’s priorities are.