Chances are strong that you’ve seen at least some non-automotive sample of Porsche Design in the past; the firm has created a healthy niche for itself within the world of product design.

Recently, International Watch Magazine had the occasion to explore the Porsche Design offices in Zell am See, Austria, and gave us a secondhand looks at where the “magic” happens.

The Porsche Design spin-off from the German sportscar manufacturer was founded in 1972, in Porsche AG’s own hometown of Stuttgart. Ferdinand Alexander “Butzi” Porsche was the man behind this new endeavor, the very same F.A. Porsche responsible for cars like the 904 race car, and the original Porsche Type-911. Two years after its founding, it moved to Zell am See, near the Porsche family mountainside estate of Schüttgut.

Incidentally, Schüttgut contains a chapel which houses the ashes of several deceased Porsche family members, including Butzi himself. 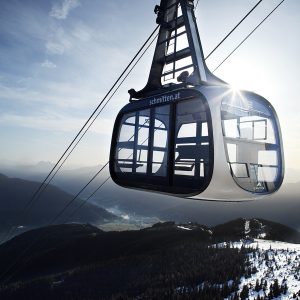 Perhaps appropriately, the town of Zell am See is even equipped with sleek, functional gondolas by Porsche Design. To this day, Butzi Porsche’s guiding mantra pervades throughout every object which comes out of the design firm: “If you analyze the function of an object, its form often becomes obvious.” Inside the Porsche Design Studio, says iW Magazine, that mantra leaps to life in the form of displays like high-tech dental chairs, a model of a tram designed for the city of Vienna, and a collection of historic timepieces stretching back over some 40 years.

The studio floor houses a small team of Porsche Design wizards, each drafting a variety of products at once. There is also 3D printing capability on-site, and a model workshop where a highly skilled craftsman can create one-off models for clients. Make your way up to the top floor, and you find Butzi Porsche’s old office, overlooking Schüttgut and offering a breathtaking view. iW Magazine reports that the office is full of nods to Butzi’s past triumphs, like a scale model of his favorite creation: the Type 904, and framed awards acquired during a lifetime of design endeavors. 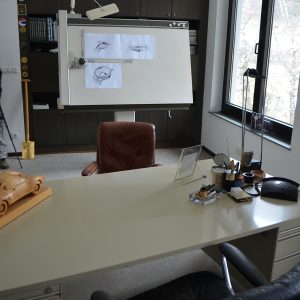 Inside the office of the late F.A. “Butzi” Porsche. Photo: iWmagazine.com

Chances are, you and I will never be allowed to set foot within the Porsche Design offices. Still, we can appreciate the firm’s brilliant efforts to marry form and function in every Porsche Design watch, gondola, tram, building, and pair of sunglasses they introduce, each item carrying on the design philosophy of F.A. “Butzi” Porsche.