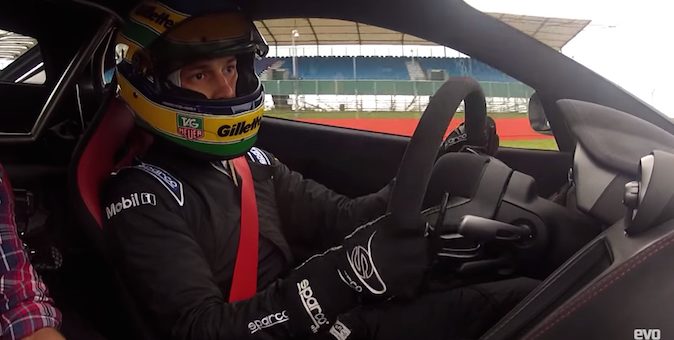 Imagine for a second that McLaren has called you up and asks you if you’d like to swing by Silverstone to have a quick ride in their new 675LT supercar, would you say yes? Of course you would, so when EVO’s Henry Catchpole got the call to do just that, he grabbed his camera, ran out of the office and jetted over to the circuit.

The 675LT is a spiritual homage to the McLaren F1 GTR ‘Long Tail’ which ran at Le Mans in 1997. It’s essentially a more track-focused version of the 650S, which in itself was a more high performance version of the 12C. It has 666 horsepower, 24 more than the 650S, and is also 34mm longer than the 650S (thanks to the extended rear spoiler) and 20mm wider.

Catchpole was originally supposed to head out with McLaren test driver Chris Goodwin in the 675LT, but when Goodwin was busy with other things, they sent him out with Bruno Senna instead, nephew of late F1 driver Ayrton Senna. So what we have here is a Senna driving a McLaren which is a homage to a legendary Le Mans racecar. We’d say that’s worth your time.

Check it out below.