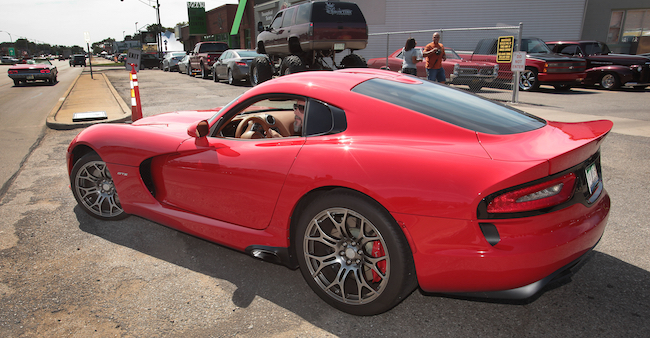 On Wednesday, enthusiasts will be able to race each other down the 1/8 mile pop-up drag strip at the Silverdome, but that’s only scratching the surface of the festivities. David Freiburger and Mike Finnegan of Motor Trend’s Roadkill web show will be on hand, with Freiberger racing his Hellcat-powered ‘General Mayhem’ 1968 Dodge Charger against Gas Monkey Garage’s Richard Rawlings in his Hellcat-powered 1967 Dodge Dart for the night’s feature event. All Dodge owners who race their car Wednesday will also be automatically entered to win a 707 horsepower 6.4-liter supercharged Hellcat engine of their own courtesy of Dodge.

The ‘Dodge Rock City’ area on Woodward Avenue in Royal Oak, MI, also returns for 2015 and will host a Viper Owners’ Night on Thursday, August 13th. On Friday night, Dodge Charger and Challenger owners will gather for a car show at Dodge Rock City, and the booth will also host Viper and Challenger Hellcat thrill rides for Dream Cruise attendees on Saturday. Also at Dodge Rock City throughout the week will be live music, games, giveaways and appearances from both Roadkill hosts.

All these wonderful events are free, however if you wish to race at Roadkill Nights, you’ll have to pre-register at Roadkill.com/events.