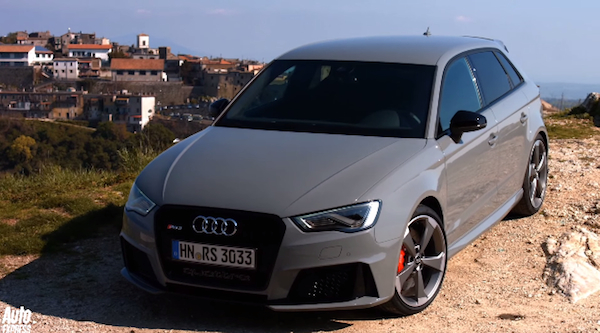 The term ‘hot hatch’ is used to refer to a hatchback car that offers up a bit more performance than your usual family grocery getter. The Volkswagen Golf GTI and Ford Fiesta ST are good examples of hot hatchbacks, but what do you call a hatchback that is beyond hot?

AutoExpress recently got their hands on Audi’s latest high performance hatch, the new 362 horsepower Audi RS3, and quickly learned it was above and beyond ‘hot hatch’ classification. To them, the new RS3 is a ‘hyper hatch’, which alone should give you a pretty good idea of what it’s like to drive.

With a 362 horsepower five-cylinder turbocharged engine, a 7-speed S Tronic dual-cutch transmission and all-wheel drive, AutoExpress concluded the RS3 is less like a high performance hatchback, and more like a budget supercar. It will hustle from 0-60 mph in 4.2 seconds and top out at 174 mph, which were supercar-like performance figures just ten years ago.

The hatchback RS3 won’t ever reach North America, but a sedan version with a similar or identical powertrain is set to arrive in the west eventually. That car will likely drive the same as the hatchback, so check out AutoExpress’ review in the video below to get the low down before the RS3 hits U.S. shores.