While it wouldn’t be incorrect to say that the Jeep brand has generally been tamed, domesticated, and made more “urban friendly” over the years, the release of the July Jeep Order Guide proves pretty incontrovertibly that the offroading FCA division still takes the offroad enthusiast’s wants to heart.

Motoring website Blog of Speed shared the Order Guide, which reveals – among other things – the release of a 2016 Jeep Wrangler “Black Bear Edition.” That configuration is named for Black Bear Road – a Rocky Mountain trail located near Telluride, Colorado. According to Jeep, a sign at the top of the trail reads “Jeeps Only,” and the brand is perhaps understandably proud of that.

To make the Black Bear Edition 2016 Jeep Wrangler Black Bear-capable, Jeep has outfitted the model with a Command-Trac transfer case with a 2.72:1 ratio, Dana 30 front and Heavy Duty 44 rear axles, 3.21:1 axle ratio (with a 3.73:1 option), tow hooks, rock rails – in a sense, the works. Ground clearance stands at 8.0 inches for the 4-door model 2016 Jeep Wrangler Black Bear Edition, with only slightly more loftiness on the equivalent 2-door model.

The July Order Guide doesn’t contain any huge surprises, but we weren’t expecting it to. And frankly, between this new 2016 Jeep Wrangler Black Bear Edition, the new Willys Wheeler Edition, and a 2016 model year Hard Rock Edition, offroading enthusiasts ought to have plenty enough capability to keep them happy for some time to come. 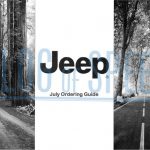 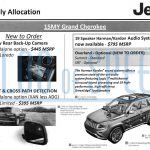 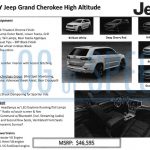 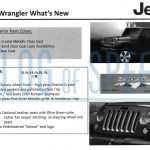 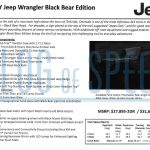 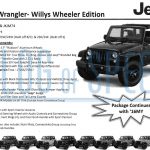 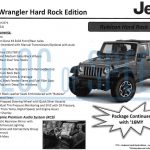 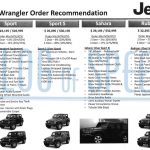