Moving right along through our veritable wealth of recently-acquired Fiat Chrysler trademark filings – which includes applications for the names “Hornet” like the 2006 Dodge concept, and both “Wrangler Africa” and “Chief” like the Jeep concepts from March – we arrive at yet another Jeep concept: the Renegade “Desert Hawk.”

Interestingly enough, the name “Desert Hawk” is already in-use by Lockheed Martin, and was given to a very small unmanned aircraft used for surveillance. Needless to say, Fiat Chrysler likely has no plans to get into the drone-making business.

Instead, the Jeep Renegade “Desert Hawk” was a concept unveiled earlier this year, alongside the aforementioned Wrangler Africa and Cherokee Chief. The Desert Hawk concept builds upon the Trailhawk trim level of the Jeep Renegade, adding “Desert Tan” paint, some decals, a roof rack, and a trailer hitch. 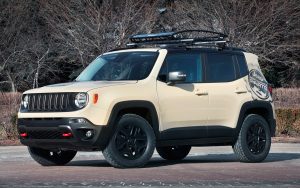 This is quite obviously the model to which Fiat Chrysler’s recent “Desert Hawk” trademark filing applies. As to the likelihood of production, we’d almost consider it a sure thing; it’s much closer in appearance and components to an already-available model, and it would surely be a hit among offroading enthusiasts enamored by the “cute ute’s” subcompact size and appearance.